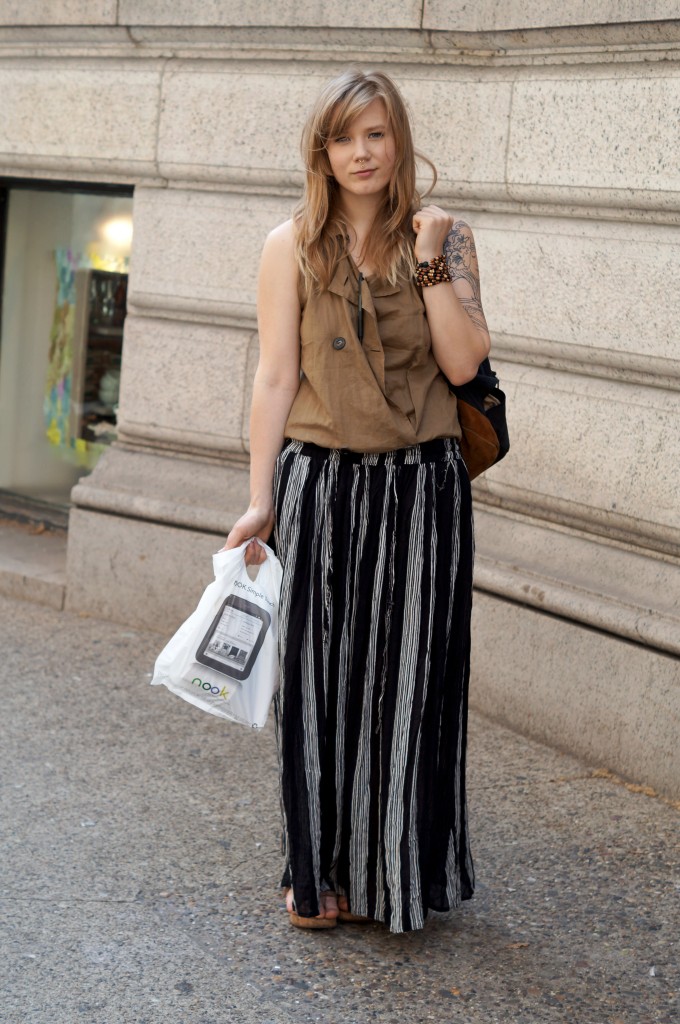 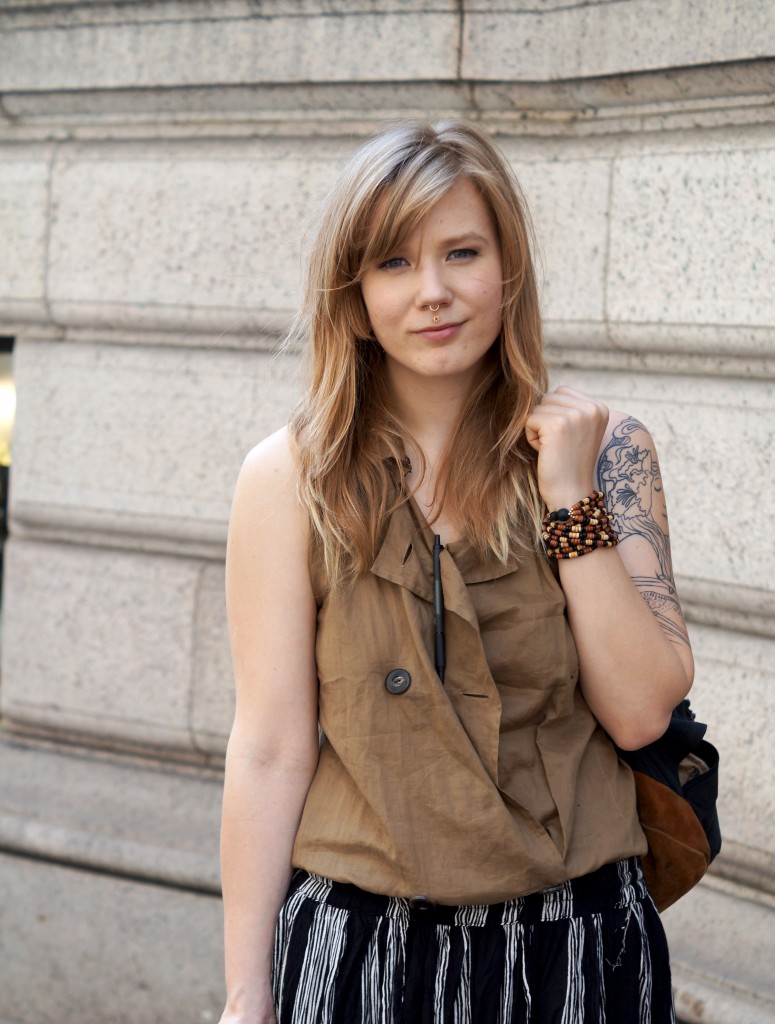 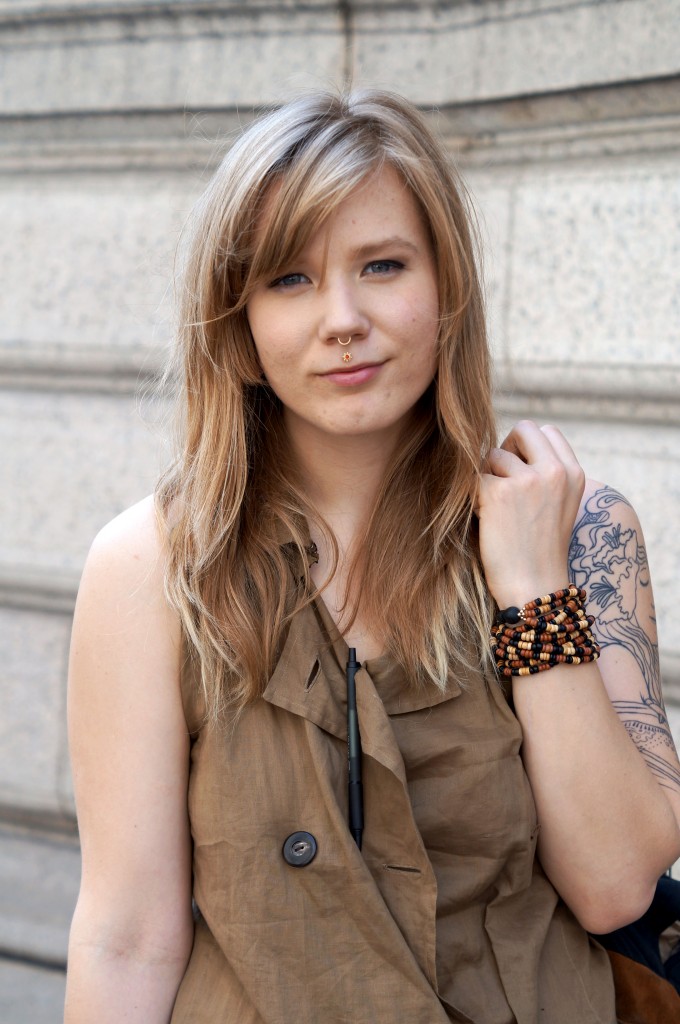 Amberleigh manages a juice bar on South Street. She’s working towards becoming a naturopathic doctor, and she has a degree in holistic nutrition. Her favorite area in Philly is Germantown and Mount Airy, where she lives.

I was quite out of practice with interviewing people, so I stupidly neglected to ask her about her clothes. I’ve been so focused on getting some details about the souls wearing the clothes that it slipped my mind. After taking a short break this winter, it’s definitely gotten harder to start up again. I’ve gotten rusty and it makes me more nervous. But I’m finding my stride again. I had a really great interview yesterday with a man on 3rd Street. Stay tuned. 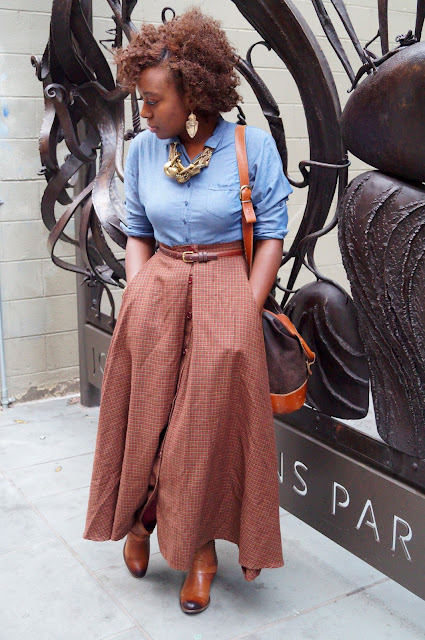 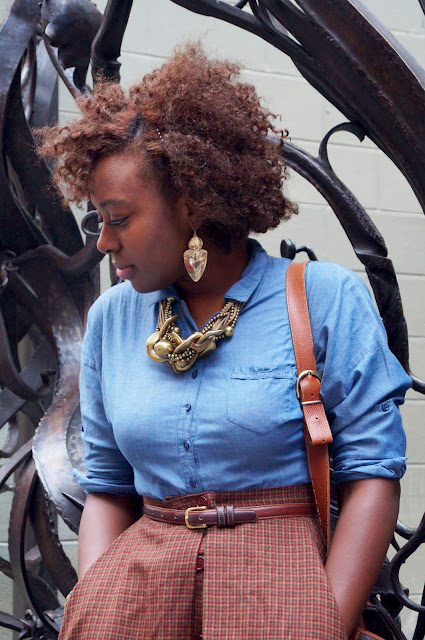 Dominique is originally from Maryland and moved to Philly to attend the Art Institute. She spends her days working a 9-to-5 in insurance and the rest of her time working on freelance photography, styling, and blogging. She loves finding her clothes in consignment and vintage shops. Her belt is vintage Coach, and she thinks that this skirt is vintage Ralph Lauren. Most of this ensemble came from Buffalo Exchange, including her great statement necklace. Her boots were a recent purchase from Steve Madden.
I love her long wool skirt. Maxi skirts were such a big thing this year, but I haven’t seen as many long wool skirts this winter. I have a few vintage ones in my closet that I don’t wear that often, but Dominique inspired me to pull them out and see what I can do with them! 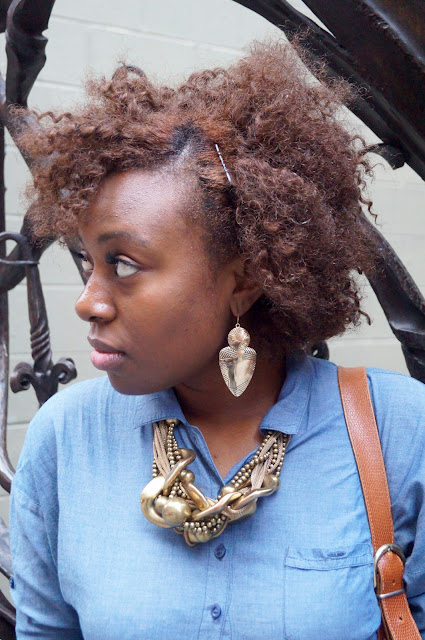 These photos are some of the most recent I’ve taken. I feel like I’m finally learning how to frame a shot rather than having to crop the photos later. I like how these turned out.

Julia studies printmaking at University of the Arts, works at Anthropologie, and interns at The Center For Emerging Visual Artists. For as busy as she is, she struck me as totally cool, calm, and collected.

Julia told me that she gets a good employee discount at Anthropologie, so she gets a lot of her clothes there these days. That’s where she found this amazing belt. We briefly discussed whether it’s a wolf or a fox, but ultimately we couldn’t decide what type of woodland creature it is. It’s adorable regardless. Her jacket is from Target, and her skirt is from Urban Outfitters. I love the juxtaposition of her badass jacket and boots with her lacy feminine skirt. 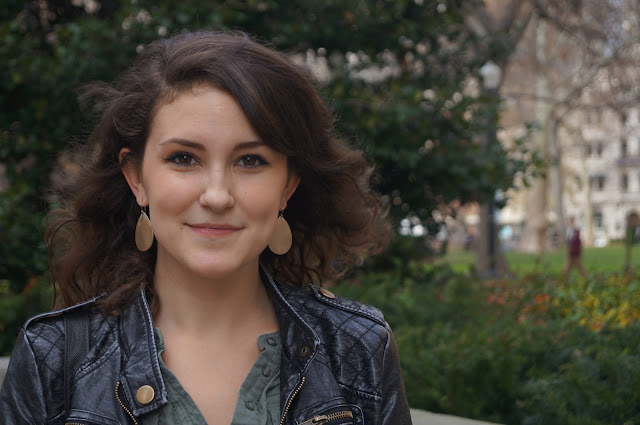 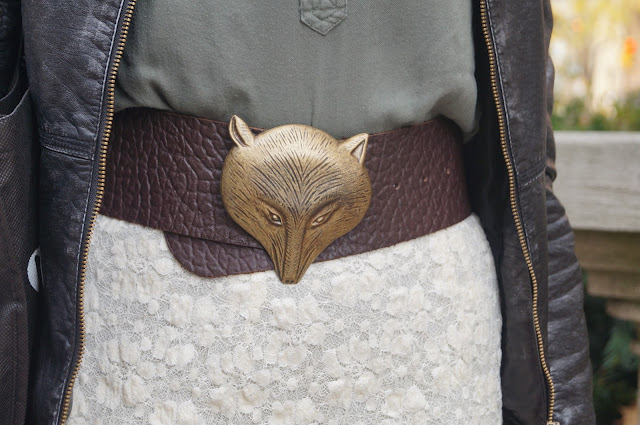 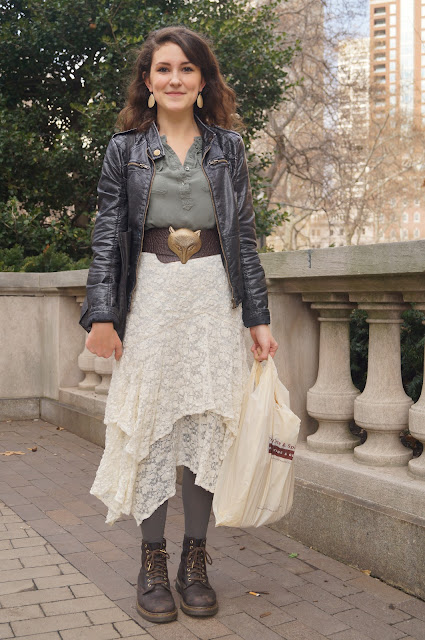 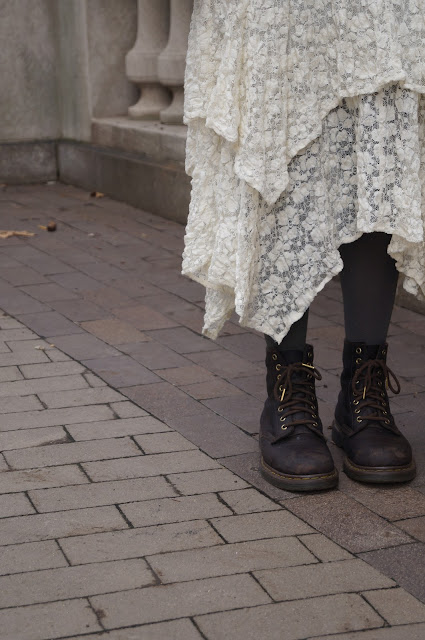 I’ve spent hours walking around, standing on street corners, and people watching, too scared and shy to approach anyone. I’ve seen lots of people I’d like to photograph, but didn’t get up the nerve in time.

One day, while standing on the corner of 18th and Walnut, a well-dressed couple crossed Walnut street towards me. I was thinking about how much I liked the girl’s outfit, and what a shame it was that I was too scared to talk to her, when the guy with her looked at me and said, “Hey, I really like your skirt!” I smiled and thanked him, and they kept walking.

I started feeling worse and worse. They were totally approachable! He talked to me! They probably would have been fine with it. I turned to see how far they’d gone down the street, but they stopped outside of Barnes and Noble to smoke! Now was my chance…

I turned away from them again and decided that if they were still there by the time I turned back around it was meant to be.

And they were still there! 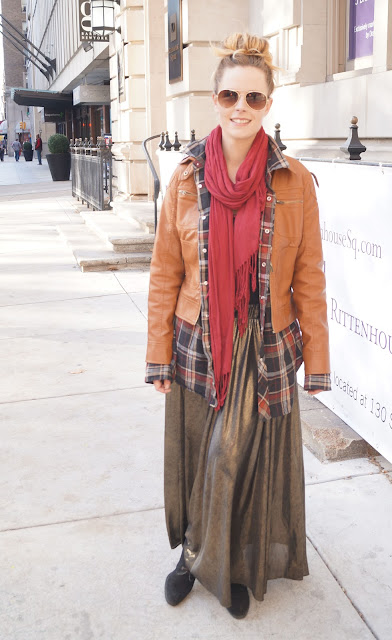 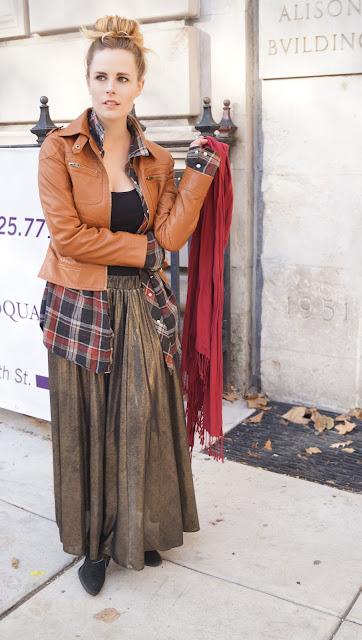 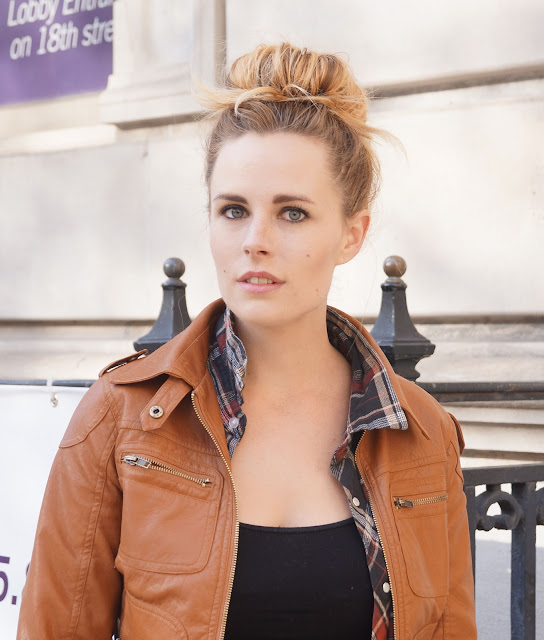 Paige is a photographer and artist from Colorado. She complimented my camera, and told me she just got the same one. She sung the praises of the thrift stores in Colorado, specifically The Arc, where she found this skirt. “I basically just pick out whatever anyone else wouldn’t pick up out there,” she told me. I love the way she layered her fitted jacket over a long flannel shirt. Paige and I bonded over our mutual love of skirts with pockets and tried to explain their virtue to her friend, Kevin.
Paige and Kevin were super sweet, and I felt a little silly about how intimidated I was when they first walked by. They were the perfect first people to approach for Street Stories. I am so glad I met them!